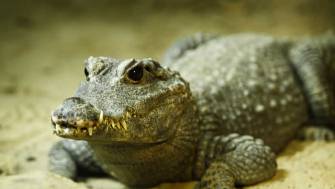 The dwarf crocodile is the smallest true crocodile in the world. This little crocodile’s home is the rivers fringed with rainforest, from Senegal, West Africa to the east and south of the Congo Basin and northern Angola.

They prefer the year-round moist and warm climate of the rainforests where they rule the waters. Their choice is the lower reaches of the rivers, where the water flows at a leisurely rate, and in deep, quiet pools sheltered by overhanging vegetation. Dwarf crocodiles are also sometimes found in pools in swamps and even amidst savannah vegetation.

It will also dig burrows into the riverbanks, used as hideouts during the day. Unlike their bigger relatives, they prefer not to bask in the sun out in the open during the daytime. Where rainfall is seasonal and the ponds dry up in the dry season, these crocodiles may dig deep burrows for themselves as shelter until the water returns.

The dwarf crocodile is a heavily armored reptile. One of its most distinctive characteristics are the tough scales that cover their entire body. Most crocodiles do not have such armored scales on their underside. The bony scales not only protecting it from injury but also preventing the animal from getting burnt by the hot sun.

It is usually colored black with a yellowish underside that features many black patches. Juveniles have a light brown banding on the body and tail, with yellowish patterns on the head. In all individuals, the snout is short and blunt.

The crocodile has a number of adaptations that aid it when in the water. Their vertically flattened, muscular tail is used to propel their bodies when swimming. Webbing between their toes help them negotiate the slippery banks. Its eyes and nostrils are located on the top of its heads to enable the individual to both see and breathe while the rest of its body is submerged. This allows the creature to watch for prey and predators while almost completely hidden.

Dwarf crocodiles snap their strong jaws shut to catch their prey, secured by a powerful bite from their cone-shaped, razor-sharp teeth. Unlike a number of other animal species, this species can continuously regrow and replace their old teeth, which are pushed out by the new ones that develop below. However, they are unable to chew food and must rely on tearing their prey into pieces that can then be swallowed whole.

Like all crocodilians, this carnivorous species is an effective aquatic predator. But in line with its smaller size, the dwarf crocodile’s prey is also smaller. Fish, frogs, birds, and crabs make up the bulk of its diet. It will also take advantage of the dense vegetation to fee on an occasional small mammal.

Its diet will change with the seasons. During the raining season, it will eat the readily available fish when swollen rivers bring an influx of fish into their habitats. During the dry season, they feed mainly on crustaceans.

Like larger crocodiles, they can survive for long periods without food.

The dwarf crocodile is a nocturnal and generally solitary animal that chooses to hunt in the dark. During the day, they rest in burrows that are dug into the grounds of the river banks. If however, it is unable to find a suitable burrowing site, the crocodile will hide amongst submerged tree roots that hang into the water.

As a reptile, it is cold-blooded, meaning that it has to sunbathe to warm its body. When it gets too hot, it will seek shade or enter the water to cool down.

Breeding happens according to the seasons. North of the equator, breeding season occurs in May or June during the wet season. South of the equator, it would be October or November. This is the only time when individuals interact.

Following mating, females will make mounds of vegetation to built their nest, located at the water’s edge. They will lay clutches of around ten eggs, although up to twenty have been recorded. The wet, rotting vegetation will actually generate some heat to help the eggs hatch. After 100 days of incubation, the young, who are born only 11 inches (28 centimeters), will hatch. Immediately, they will begin to vocalise, which stimulates the female to help the hatchlings to escape from the nest. After retrieving the young, the mother will escort her offspring to the water, staying close by to watch over them for some time.

As a potential prey to so many predators like large fish, birds, mammals, and reptiles (even other crocodiles), only a few from each batch will make it to maturity at the age of five or six years.

It is not clear whether the dwarf crocodiles should constitute one species or three. Recent research has indicated that there may be three genetically distinct groups.

The species name, tetraspis, means ‘four shields’, referring to the four prominent shield-like scales on the back of its neck.

It is smaller than the largest lizard in Africa, the water monitor, which can exceed 2m in length

Oops, you forgot something.

The words you entered did not match the given text. Please try again.

Reply Kenny
4:23 AM on February 18, 2017
Thank you guys for writing the article about African Dwarf Crocodile! I actually have a blog dedicated for reptiles (crocodiles, lizards, etc). I recently have wrote an article about crocodiles too by including some of your infos in it! 🙂

I have also linked my site to your article. Check it out: http://reptilianzone.com/crocodile-guide/